Title: Safe In Your Arms
Author:

lyonessheart
Prompt: # 2
Summary: To dance means to fall in love for a song - but what if you have to dance with your rival?
Rating: PG-13
Word Count: 6000
Author's Notes: Thank you dear mods for being so patient and thank you dear cat for taking time to beta this little baby. I hope that I created something that the prompter enjoys at least a little!

(Safe In Your Arms)

Title: It's Raining Men
Artist: artisticProdigy/drarryProdigy
Prompt: # 9
Summary: When Draco took off the bandage, it felt just right.
Rating: General
Warning(s): Post Surgery
Medium: Digital Art
Artist's Notes: Hello! Thanks for having me in the event again and thank you for Tainara_black for the prompt! As a genderfluid person, I must take this prompt (and run with it to the art app)! I also would like to thank the DTH mods for their hard work for keeping this event running through the years! It's always a pleasure to see the contents here (hohoho). Hope to see you guys again in the next event! Enjoy my art <3 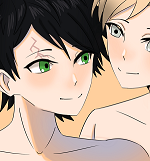 maraudersaffair
Prompt: # 48
Summary: Draco is the most famous man in Britain. Harry is his bodyguard. Harry likes watching Draco and he likes fucking with Harry. They both are desperate for each other, but Draco refuses to accept it until one day he thinks Harry has run off to get married to someone else.
Rating: Explicit
Warning(s): jealousy, voyeurism
Word Count: 3800
Author's Notes: Dig: I hurried up and wrote this for you! Thanks for all your work as a mod. I'm glad I got to write bodyguard!Harry *drools*.

Title: Be safe, be true, and I'll think of you
Author: alrespirar
Prompt: # 16
Summary: Seeing Potter again shouldn't feel so easy. Five years later Draco is still holding onto memories of morning afters and sunsets in the Tuscan countryside. He wonders if Potter remembers too.
Rating: NC-17
Warning(s): Sexual content, social drinking and mentions of cigarette use.
Word Count: 14.1k
Author's Notes: Thank you to the mods for hosting this fest. What better way than to return after a five year hiatus with fest fic. Thank you to my beta Cat for your support, hype and guidance. I appreciate you so much. (More on ao3)

digthewriter
Prompt: # 78 | they have been together for more than 7 years now, but neither Harry nor Draco know how to make the first move towards something new…
Summary: Harry wished Draco was ready to take their relationship to the next level. Maybe it's time for him to ask the question.
Rating: R/M
Warning(s)/Content: Fluff. Light angst. Overall a happy ending fic w/ cute moments.
Word Count: 3900
Author's Notes: All my thanks to

sassy_cissa for the beta. All the remaining mistakes are mine. I hope you like this fic! ♥ I'm not super into writing established!relationships so I hope I did a good job! (lol)

enchanted_jae
Prompt: #11 (There's a ghost in Harry's new house. The ghost is connected to the Malfoy family for some reason, so Harry had no choice but to owl Draco to end this ghostly torment.)
Summary: Draco never thought Saint Potter would come to him for help, but he's ready, willing, and able...if there's lube involved.
Rating: PG13
Word Count: 1633
Author's Notes: Thank you to

Title: Packed Lunch
Artist: eggcheeseham
Prompt: # 51
Summary: “Honestly, Potter, is that all you’ve brought for lunch today? No wonder you’re so thin. Here... take mine.”
Rating:General Audiences
Warning(s): none
Medium: Digital art
Artist's Notes: I used the prompt as the summary since idk how else to describe this piece lol
I'm super excited to participate in this fest again! kosibee had a super cute prompt which vibed with me ehe~
I felt this prompt was better fitted for a comic, and since I never made a comic before I thought it'd be great practice. I didn't have the time nor energy to make a fully rendered illustration piece (a bit burnt out from portfolio prep)
It's not very pretty or refined but its my first attempt after all ^^ hope you like it!! 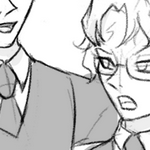 lomonaaeren
Prompt: 92
Summary: Rita Skeeter’s Harry James Potter: An Unnatural History is a best-seller, mostly due to the fact that Skeeter’s collaborated with a photographer who’s infused the pictures in the book with Harry’s actual memories. As Harry struggles to survive the storm consuming his eighth year at Hogwarts, Draco Malfoy becomes an unexpected ally.
Rating: NC-17
Warnings: Discussion of canonical child abuse, violence, angst, revenge, revenge porn, humiliation, past deceptive relationship.
Word Count: ~29,000
Author’s Notes: This fic is for advanced-potion-making’s request for the Draco Tops Harry fest and uses their special requests of friends to lovers and eighth year at Hogwarts. Hope you enjoy! Thank you to my betas, L. and K.

Cassiara
Prompt: #17 by Natsukileerkolover. 'Hermione and Ron is sick of seeing Harry depressed because he can't find a single person to date that isn't into him because of his fame. So they set him up with a new wizard dating site where personal pictures and names aren't allowed.'
Summary: Harry feels trapped by the unwanted fame he received after the war. Everyone has an expectation of who he is before they meet him, and they all want a piece of the famous Harry Potter. Feeling unable to connect to anyone and imprisoned in the life of someone he doesn’t recognise as himself, Harry turns to Ron and Hermione who set him up on an anonymous dating site and helps him find a place to escape. Free from all the expectations placed on him Harry starts to heal, and the anonymous man he meets on the dating site shows him love might not be as impossible as he’d feared.
Rating: Explicit
Warning(s): Explicit sexual content, mental health issues, angst
Word Count: ~30k
Author's Notes:I always look forward to reading fics in the DTH fest, and I have so much fun writing for it! Thank you so much to the mods for hosting it this year too! My beta, Pineau_noir, has massively improved the quality of this fic, and I'm sososo grateful!