Title: For Better, for Worse
Author:

carpemermaid
Summary: For five years Draco has tried to make his father see, that he could make his own choices, but now he really has to make the most important one of his life.
Rating: PG-13
Warning(s): none
Word Count: 5172
Author's Notes: Dear

carpemermaid, I know you expected something different when you posted your prompt, but the boys somehow had their own ideas. I hope you still like what I have made of this. Special thanks goes again to my lovely beta reader

smirkingcat, without you I would have given up at least twice on this.

Title: I'll be there for You
Artist:

bererjs
Prompt: #3
Summary: Draco helps Harry through his depression after a work incident.
Rating: PG-13
Warning(s): blood, angst,
Medium: Paper & Photoshop
Artist's Notes: Well first I want to say a big huge over the top thank you to the mods for being so patient with me. Seriously, I cannot thank you guys enough. I don't think you guys would see this art if it wasn't for the patience of the Mods. Also,

vaysh, thank you for the lovely prompt, it was such a lovely inspiration.

Sorry for the delay in posting. Do enjoy the art. ♥

Title: It Started with an Apple
Artist:

fuyutu
Prompt: #90
Summary: All it takes is one random act to spark the change of a relationship.
Rating: PG-13
Warning(s): None
Medium: Pencil, Pen, Markers
Artist's Notes: I'd originally envisioned something more in depth and detailed but simply didn't have the time, so sorry. I hope you like what I have presented, it's still the basic story of what I'd planned.

kurla88
Prompt: #86
Summary: Everyone knew, of course, that the prince’s birth parents had been a blood traitor and a mudblood active in the rebellion against the king before he’d taken power. After removing those scourges, the king had benevolently decided not only to spare baby Harry’s life, but as a symbol of his forgiveness and hope for the future, to raise Harry as his own, as a prince.
Rating: PG-13
Warning(s): AU
Word Count: 8,953
Author's Notes: This was written for a great prompt from

leontinabowie. I did not meet all your requests, but I hope you like it anyway! Thanks to my beta, who demanded to be left unnamed.

( You are about to view content that may only be appropriate for adults. )

capitu, based on art by

raitala (used with permission)
Download Link(s): mp3 [26.9 MB]
Reader's Notes: Thank you so much to

raitala for creating this wonderful piece of fic and art, and for letting me record it. I've tried to capture the mood of the story, which to me is a quiet and sober one, in spite of the summary :)
Many thanks to

starfishstar, for the beta work and for convincing me to add music to the recording. I think you're absolutely right!
The music in the podfic as well as the story itself is Dropkick Murphy's "Rose Tattoo". 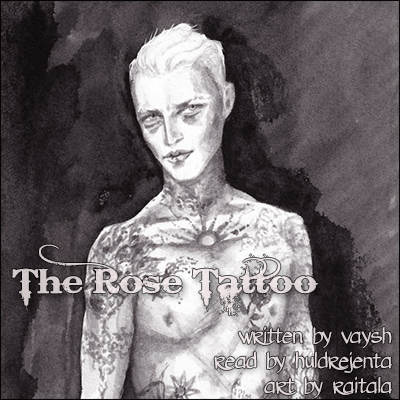 This is the second fest entry today! :)

Title: Get it Right
Author:

fire_juggler
Author's Summary: On the insistence of his parents, Draco begins to see a therapist to discuss his difficulties with physical intimacy. When he changes his appointment time, Draco discovers he’s not the only one seeking assistance as a result of events which occurred during the war and he finds comfort in the most unexpected of places.
Story Link: Touched
Rating: PG-13
Warning(s): None
Content Notes: Post Traumatic Stress Disorder, sexual dysfunction, and mental health issues
Podfic Cover: created by

writcraft for writing a fic that captured me from the get-go and for giving permission to record. ♥ Also, thank you to

vaysh for acting as beta. I love this story so much and it was such a pleasure to read.

Listen to the Podfic on AO3: **here**.
Alternate Streaming for Mobile Devices: **here**

raitala
Prompt: # 59
Summary: When you came in the air went out
And every shadow filled up with doubt.
I don't know who you think you are,
But before the night is through,
I wanna do bad things with you.
Rating: PG-13
Warning(s): Pinning
Medium: Pencil and watercolour
Artist's Notes: Just more pinning really. You can't have too much of the stuff. Not vampires, but inspired by the links from True Blood Vaysh sent me. :) Many thanks to my beta

Title: Flotsam and Jetsam
Author: Belladonna
Pairing: Draco Malfoy/Harry Potter
Genre: Angst
Rating: PG-13
Disclaimer: The world of Harry Potter and its characters are not mine.
Summary: On the beach where they had said their farewell, Draco feels a familiar almost-pain in his chest as he gazes at Harry, who, still clad in a wedding suit, avoids his gaze.
Links: LJ, AO3, FF.net
Collapse